Evie is at that fun age where it seems like we are at the doctors office every few months just to keep her properly vaccinated. It literally seems as if they are due for one or two shots every three months from the time your child is born until they hit 2.

Not that I’m complaining… give me all of the vaccines!

Anyway, the kids daycare director called me last week to remind me that Evie’s Form 121, or Immunization Certification, was expiring August 1st. She wanted to be sure I had an appointment scheduled to keep our girl compliant.

And I did, only it was for the tail end of August.

Seeing as how it was currently the last week of July…

I called the Pediatrician’s office, who just love when I call, let me tell you, and asked for an earlier appointment. The sweet nurse told me Evie’s doctor could see her bright and early on Saturday morning.

Evie was armed with her juice cup, a container of Puffs, and my car keys as she insisted on walking up to the building by herself. Because she already had her hands full, I slung her backpack onto my shoulder and walked alongside her (a hand firmly on her shoulder in case she got any wild ideas) and up to the door where a nurse was waiting to give us a look over. 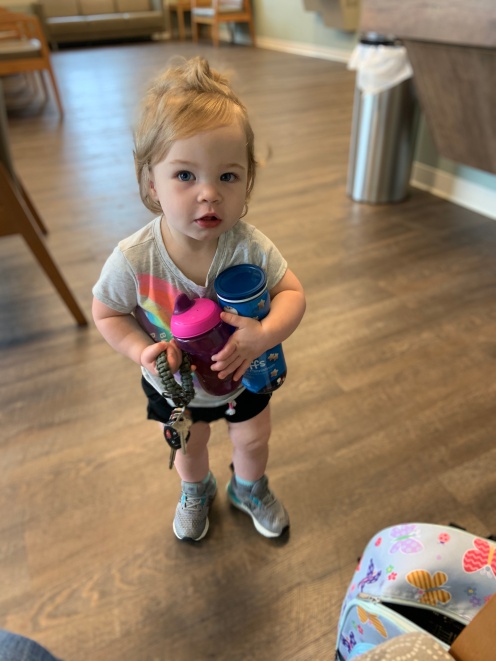 Once it was verified that neither of us had fever, we were granted entry to the building. We settled into a comfy chair and waited.

On the wall opposite us a woman sat with four boys who looked to be aged from about 9 to 18 months. She made as many faces and gestures to make Evie giggle as she could with a mask on and then loudly whispered to me, “How old is she?”

Motioning to the row of boys seated beside her, she said, “We were trying for a girl.” Not sure whether it was polite to laugh or not, I raised my eyebrows at her.

“I know, I know,” she said giggling, “She’s beautiful, enjoy the days where you are actually still capable of holding her down for shots. This one,” she said, nudging her oldest, who was seated beside her with AirPods in, “is still scared of needles. He can’t even handle having his finger pricked without me sitting on top of him. How many do you have?”

“Thank you! She is my second. She has a three year old brother who is hanging out with Daddy this morning,” I told her.

A nurse poked her head through the door and waved the boys towards her. Evie and I smiled and waved at our new friend who was doing a very embarrassing dance while walking behind her mortified children singing, “Shots, shots, shots, shots,” and I’d be lying if I told you I didn’t store that image away for future use to embarrass my own children one day.

She weighed 25 pounds, measured 30 inches in height, and sat while her nurse and doctor poked and prodded her. Checking all of the things they check to ensure she is coming along as she should. “She’s perfect, ya’ll keep it up,” her sweet doctor said to us, “Annie will be in soon to give the two vaccinations she’s due for and then ya’ll can head on out and enjoy the rest of your weekend.”

When Annie arrived, I put Evie on the table and pushed her backwards, pretending I was about to tickle her. With Evie mid-giggle, Annie leaned in and gave her the first shot. As her face started to redden and her giggle caught in her throat, Annie hit her with the second. She leaned away so that I could snatch up Evie right as the scream made it to the surface.

She buried her face in my hair, wrapped her arms around me, and let it all out. The frustration, the betrayal, the anger.. she screamed it all out. Annie patted her on the back and headed out the door, leaving me to deal with the product of her ruthless, duplicitous behavior. (I’m kidding ya’ll, Annie is lovely).

As soon as the door clicked behind her, Evie popped her head up and looked around. Seeing that we were alone, she gave me a big, tear-streaked smile. “Oh, you little devil,” I said to her as she wiped her tears and snot off on the shoulder of my t-shirt.