There’s something raw about having children that no one ever warns you about.

People will tell you that you won’t sleep for the next twenty years and you won’t be able to go to the restroom by yourself ever again. You’ll be warned about how much food toddlers and teenagers consume and how much pee you’ll have to clean off the bathroom floor. And about all of the bruises you’ll get from throwing yourself down to soften their falls and all of the headaches that come when their hormones really kick into gear.

But no one ever tells you about the ache in your heart that starts when they first start growing in your tummy and never stops. At first, you’re aching for them to enter the world, to be in your arms.

But, then they are.

And then, you are aching for them to stay in your arms.

But, then they don’t.

They get so big so fast, and so suddenly. Before you’ve even processed that you need to bake a cake because family is coming over to celebrate their birthday, your child is another year older. Another year closer to being all grown up.

Evie’s birthday was on the 30th of April. She turned one.

It shook me up a bit (if you couldn’t tell).

Two weeks before her birthday she gave up her formula bottles completely. Just cold turkey. She walks, she runs, she laughs, she screams. She actually threw her first tantrum last night, which was shocking because she’s not the type you would expect to throw a tantrum.

Honestly though, Evie is wonderful.

I wish I could put into words how absolutely wonderful she is.

When I pick her up from school in the afternoons, the very first thing she does is to put her hands on my upper arms, her face in my neck and to squeeze. She does it so quickly and so lightly, but it is by far one of my favorite parts of each day. Daniel gets her out of her crib each morning just so he can get one of those magnificent Evie hugs.

She has finally decided to start saying “Mama”. Though her current favorite phrase is, “No, no, no!” (which she says mockingly and finds hilarious). Her Daddy had to put locks on all of the kitchen cabinets recently because of her adventurous spirit. She would climb inside a cabinet, emptying it on her way in, and sit inside wagging her little pointer finger at you, “No, no, no..”.

She waves good-bye and she blows kisses (if you’re lucky).

Another favorite activity that has manifested in the past few weeks is for she and Lee to stand side by side in front of the toy basket in the living room and empty it by throwing toys over their shoulders as fast as they can until the basket is empty. They think this is great fun.

And I knew that little boys loved to wrestle, but I had no idea that she would be as into it as she is. You really have to watch her, because she will come up behind Lee and try to bring him to the ground.

She has a head full of gorgeous light brown hair and the biggest, clearest medium-blue eyes. And the poutiest lips I have ever seen.

Thanks to COVID, she got to have two birthday parties. She had the time of her life at both! And.. TWO SMASH CAKES!!

She had so much fun opening all of her presents (with Lee’s assistance, of course).

She got new clothes, a new bathing suit, rainboots, bath toys, a stuffed puppy and puppy kennel from Aunt Noonie, a toy box from Mamaw and Papaw, framed prints for her room from Grandpa and Nana, and so, so much more.

She was one happy little girl! 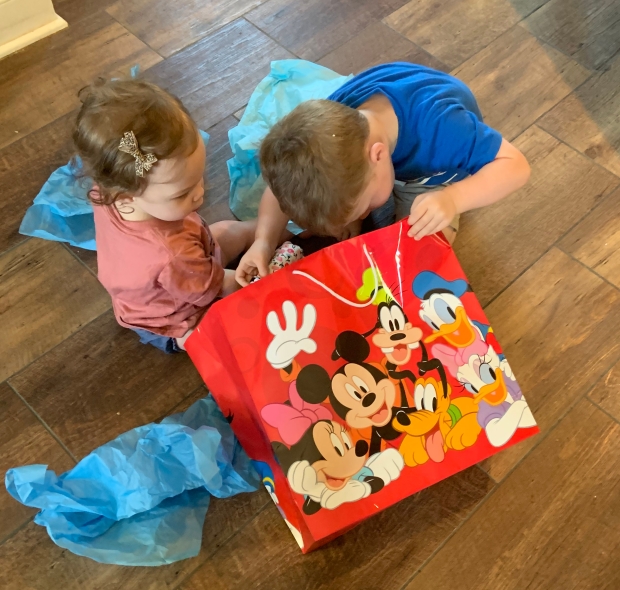 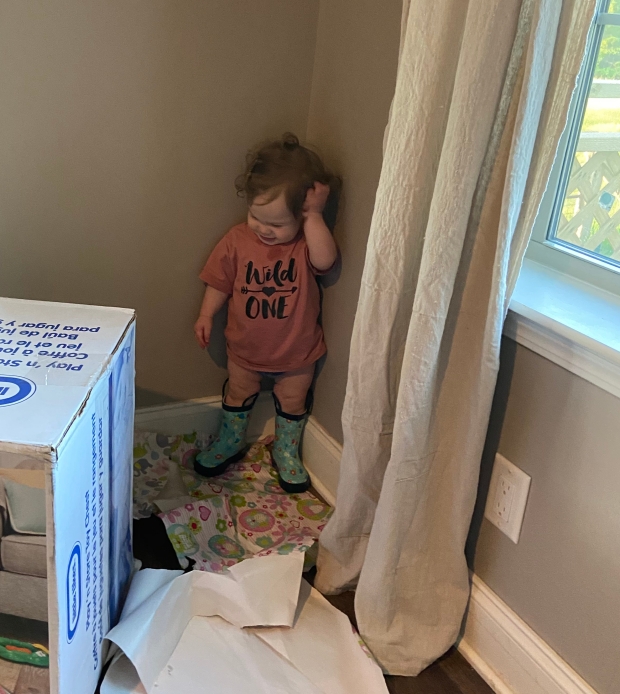 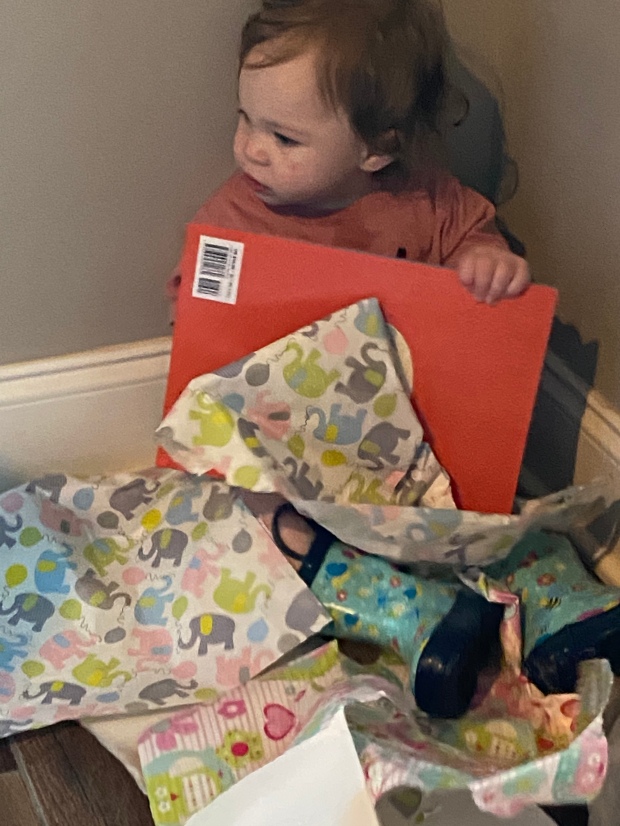 She finished her birthday weekend off by playing in the blow-up pool we have on the back porch and running through the unicorn sprinkler Aunt Boo brought over. I tried to get a picture of Lee and Evie together, but this was the best they were willing to do.

Thank you to everyone who showed our girl some love for her special day!