I fully understand and appreciate that most of you come here for Lee stories, so let me start out by saying that Lee had THE BEST Christmas! D and I try so hard to strike a balance between spoiling him with toys we know that he will love and educational toys that we want him to love.

He almost always loves them both.

And my sweet little love would still rather have a new book in his hand than pretty much anything else.

However, his Grandparents and Aunts/Uncles REFUSED to be reigned in this Christmas. He received a stuffed Mickey Mouse and Goofy, soooo many cars, trucks and tractors, a fun new chair with his name on it, his very first Harry Potter book (for Mom and Dad to read to him, of course), a ride-on, battery operated green four wheeler, and a really, really cool latch board that his Grandpa made especially for him.

And so, so much more.

Santa Claus brought him a stack of puzzles and a table for his Mega Blocks set. D and I got him an Amazon Fire tablet for Kiddos. We made sure to load it with coloring games and Alphabet flashcard apps, but the only thing he wants to do on it is watch that Baby Shark music video over and over and over again! Oh well, plenty of time! 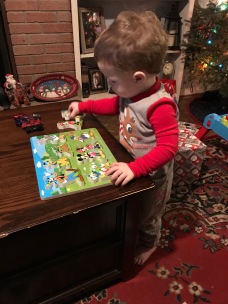 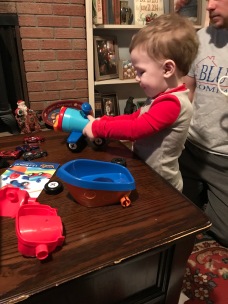 Oh! And Santa Claus also brought some cool new bath toys for Lee! His favorite is this little box of crayola water changing tablets. We didn’t go crazy the first time we tried them and opted for the blue color (Lee LOVED this), but we will definitely be experimenting with some wild color combinations soon! Now. I have been getting a lot of questions from friends (new and old) about my current pregnancy with our second child. Many young ladies would like to know what the main differences (if any) are with your second pregnancy versus your first.

GIIIIRLLLLL. Let me tell you what I have come to realize thus far (bear in mind that with only being at my halfway point I do not know it all just yet).

First off, it does not hurt as badly as the first pregnancy. My sweet Momma and Mother-In-Law reminded me that everything inside that was going to need to be stretched out (other than my tummy), was already stretched out.

With Lee, I had round ligament pain that was out of this world! I was in the bath almost every night of the second trimester trying to soothe that bad boy. With this pregnancy, I have really only noticed.. heaviness, for lack of a better world. This girl is heavy. I feel like I’m carrying a weight much bigger than her actual size. And I feel like she is literally about to fall out. I made the comment to my doctor that I felt like she was swinging between my knees and reassured me that this is very common, something about your pelvic floor not being as strong as it was the first time. He did list off a few exercises that I could be doing to work on helping that out, but who has time?

Trying to explain this feeling to D was probably one of the funnier conversations we have ever had. I could not put into words how, exactly, it felt and he was so, so confused…

“I just feel like she is about to fall out,”

“Yes, but how? What are you doing? Are you pushing?”

“No, it has to just be the way she is positioned, just like she isn’t in the same spot that Lee was,”

“That doesn’t make any sense. Don’t drop her.”

Secondly, I am having a lot harder time eating this go around. Lee pretty much let me eat whatever I wanted. Nothing seemed to bother him (unless it had too much spice). Some people will tell you that “every pregnancy is different,” and some will tell you “this is the difference in carrying a girl versus a boy,” whatever it is, this child does not like a lot of things.

Pizza? Get the hell outta here.

Honestly, I should have known better about the chili. I told myself, “Oh, it’s not spicy, you will be fine!”

That was a mistake.

I wound up on our bedroom floor in a cold sweat with my head between my knees for nearly an hour before I could manage to get it back up… Poor D looked terrified. I came out of the restroom and he was standing there like an Angel from heaven with an ice cold ginger ale and my nausea medicine.

The man had a halo on his head and everything, I swear.

I do not understand how I am still nauseous every single day. Lee spoiled me! After the first trimester, my nausea with him was completely gone. With this little love, I have to go ahead and take a nausea pill with my Prenatal vitamin every morning, because, if not, I will lose my breakfast.

Halfway through my 19th week I convinced myself that I did not need to take a nausea pill that morning, everything would be fine.

Fast forward to half an hour later when I was pulled over on the side of the road, halfway to Lee’s daycare, losing the little bit I had eaten already that day. Poor Lee man was in the back seat saying, “Mommy. Sorry Mommy. It’s okay Mommy.” I opened his door and leaned my head on his shoulder to wait a minute longer so as to be sure I was finished and he patted my head reassuringly. He is such a sweet boy.

And, finally, I would say that I am not as obsessive this time.

When she first kicked, I instantly knew that it was a kick (and she has yet to stop kicking!). I remember doubting the first movements I thought I felt with Lee, constantly convincing myself they were something else instead.

I don’t check my pregnancy tracker apps daily; I don’t need to know what fruit she is the size of every day. I can feel her and know which part of her is where. It truly is amazing how, after the first pregnancy, you are so much more calm and easygoing about everything that is happening.

There’s no panic. No freak outs. No pulling my copies of the three pregnancy manuals I bought with Lee off the shelf to look something up to “see if it’s normal.”

D likes to joke that I just don’t have time to fixate on anything she does for too long, because we have Lee running circles around us, and maybe he’s right. But I am enjoying it. I love having one life we’ve created resting on me while the second life we’ve created is swimming around beneath his head. It truly is wonderful.

(Please note that the picture below is 2 months old and there is quite a bit more tummy under Lee’s head nowadays!)